The fundraiser is almost over! I'm getting on a plane tomorrow, and so far I'm just under half of the pre-sale goal at 24 copies. Thank you everyone who has ordered a copy so far! This has at least funded my ticket to Seattle.

They're is still time to order a comic to help fund this trip, if you'd like to help make my night. The printing has been funded by Koyama Press, and the final product promises to be much fancier then I'd originally intended.

BONUS COMIC (so that I still feel like this blog is entertaining people, and not just about endless self-promotion)-

I drew this way back in September, for the Picture Book Report, but since that blog has ended it seemed safe to post it.

Posted by Colleen at 7:44 AM No comments:

It's Diary Tunes time again! Robyn Chapman organizes this mix exchange every New Year's, with the bulk of the cd's arriving in February, just in time to stave off the "this winter is never going to end" crazies. This is my third year participating, and the first year where I think I know everybody on the exchange list!

It's been neat so far seeing how well everyone's mix fits their personality. For example, listening to Nomi's mix, my first reaction was "all these songs make me think of Chicago", and with Beth's, it's non-stop dance tunes.

I wonder what my mix says about me?

This Is A Low-Swipe
Textbook Love-Fleet Foxes Fleet Foxes
Ossining-Mike Doughty
My Only Offer-Mates Of State
Good To Be Awake-Sandman
Beautiful-Hepcat
Cinnamon-The Long Winters
Brave The Cold -Mr Hudson
Major Tom (Coming Home) -Peter Schilling
This Town Ain't Big Enough For The Both Of Us -Sparks
All the Young Dudes-Mott the Hoople
Primary Colours -The Horrors
Black Sheep - Metric
40 Day Dream - Edward Sharpe & The Magnetic Zeros
The Show Must Not Go On -Harvey
Like A Friend -Pulp
Sea Legs -Pretty & Nice
Posted by Colleen at 12:50 PM No comments:

Hey! I'm up to 21 pre-orders. Not quite halfway to my goal of 50,  and this fundraiser is going to end on March 1st when I leave for Washington State. If you've been waiting for the right time to order a copy, now is that time!
Although I'd originally given myself until June to complete the comic, new plan is to have it finished by MoCCA. Working on some of it now in order to get a head start-

I'm working on these drawings for the McNeil Island Historical Society, but

I hope to incorporate them into the book and have a little section on the island's history.

That's all for now!
Posted by Colleen at 7:43 AM No comments:

This fundraiser experiment has been going on for a little under a week now, and the results have been much better than I expected.

Each little book on the meter represents 5 copies sold, I'm at 11 now and happy with how things are moving along.

BUT THAT'S NOT THE BEST NEWS!

HERE IS THE BEST NEWS (following this cartoon dramatization, depicting the events of last Tuesday):

Anne Koyama has generously offered to fund the printing of this comic! I was so surprised by her offer, it was like being punched in the face (in a good way). I am really excited to be working with Annie, since she's been publishing some of my favorite artists for a while now.

NOW TINY TIM WILL LIVE TO SEE ANOTHER CHRISTMAS!
(Tiny Tim is my bank account)

Even though the printing is funded, I still need to find home for all these comics once they get here. So if you haven't already, please consider pre-ordering a copy and helping this little fundraiser along.  Thanks!
Posted by Colleen at 6:04 AM 6 comments:

DON'T CALL IT A COMEBACK

Annie Koyama of Koyama Press has been putting together this "Kick-Ass Annie Project," a collection of different artist's versions of her logo. Here's my contribution-

This is a prelude to some very exciting news that I'll share in the morning.
Until then-

Posted by Colleen at 8:33 PM No comments:

Cartoonist's Night at the Theater 2- Eurydice at Dartmouth

As you might have guessed from the title of this blog or my comics, I'm a sucker for a good tragedy, and nobody does tragedy like the Greeks! So of course I jumped on the chance to attend Dartmouth's production of Eurydice last night with ever-talented Jen Vaughn. Hurray for theater!

We were seated in the balcony, so as not to distract the cast or other audience members with our furious sketching. Down side, this meant it was really dark. I did this sketch of the set before the lights were lowered, and a few blind drawings after that. The rest of my sketches were based on the blind drawings plus reference photos that Jen managed to take with her phone.

The "Nasty Interesting Man" (Evan Curhan) and Eurydice (Genevieve Adams). I thought this character was supposed to be Aristaeus? He also played "The Lord of the Underworld", which I neglected to sketch because I didn't want to have to draw a tricycle.

The stones, (Mary Rockwell, Elizabeth Neil, and Katie Lindsay) sort of the Greek Chorus of the play.

It was a great production, and I was especially impressed by the sets and lighting. Go see it if you can!

Been going skating at least once a week. Still not brave enough for derby practice, but it gets me away from the drawing board and keeps my muscles from atrophying.

Even though I'm not on a team trying to knock people over, some days it feels like I'm in a derby bought anyway because of a)pre-teens, who are b) dressed all in dark colors, and c) on skates for the first time careening around the floor. One such kid already injured two of my friends, and my biggest worry is I'm going to (mostly) accidentally trip over some kid and break their arm. 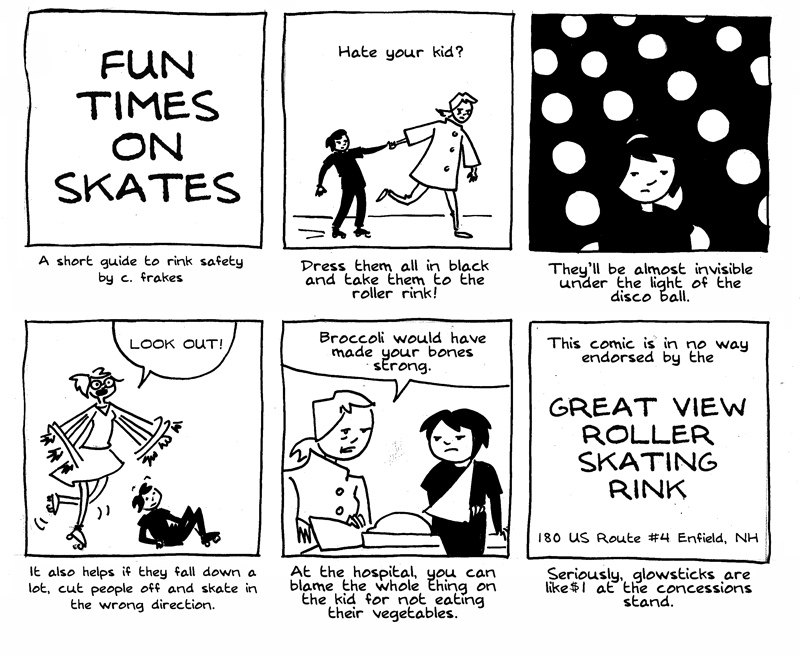 Sketchbooks are a good way to work out this anxiety.

While you're here, I'm still raising money for my research trip to McNeil Island! Please check it out and pre-order a book, if you feel so inclined.
Posted by Colleen at 6:34 AM No comments:

I'm begging for money, just like everyone else on the internet!

Here's the link to the earlier post about McNeil Island. Here's an article with some more info about the place, for those who are curious: "The homes and schoolhouse are boarded up. Electricity and water have been turned off."


AND here's the link to my Etsy Store, where you can pre-order a copy of this mini comic and help fund my trip. I found a really good deal on plane tickets, and only need about 50 pre-orders to cover the costs!

Or if you don't like comics, I'm also taking commissions!

I'll draw just about anything you'd like, within reason. Nothing too dirty (pinups- yes, centerfolds- no.) These prices are a little higher than what I usually charge, but that's so that I don't get overwhelmed with requests.

Thanks in advance for those who are able to help! And to everyone who has sent me emails about the project so far. It's such a weird ordeal, and I'm glad to have comics to help me sort it out.

Posted by Colleen at 7:56 AM No comments: 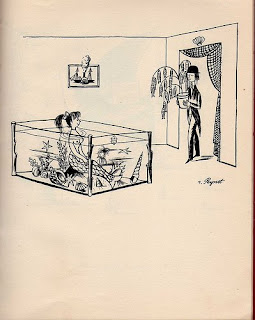 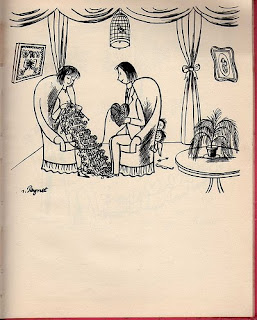 Posted by Colleen at 6:03 AM No comments:

Derby portraits commissions are still for sale on Etsy. Just $5 for now!

Here are a few I did last night as a warm-up:

Posted by Colleen at 5:09 AM No comments:

Most of his advice is car or food related

Yup. This is what I do with my time.
Posted by Colleen at 8:59 PM No comments: