Oh yeah, I'm going to be at the Comic Geek Speak Super Show in PA this weekend with Jon Chad, Alex Kim, Sean Ford and Chuck McBuck! Between all the other shows and book making and no sleep I kinda forgot about this one.

This'll be my first time at a "mainstream" show, so I've been working on some DC superhero (but mostly heroine) sketches to sell. Check it:

Hm. One of these days, I'm gonna learn to draw dudes.
Posted by Colleen at 9:29 AM No comments:

This book is DONE! I've spent all of my free time these past couple of days assembling and binding 150 copies of it (there's still another 150 left to go, but I need a break). It'll be available in Toronto, CA at the Toronto Comic Arts Festival, May 6-7 2011.

Thanks again to Annie Koyama and Koyama Press for funding the project! And to Washington State Department of Corrections and Dick Morgan, Paula Byrne and Judy Hubert (and a lot more people I'm probably forgetting) for giving the McNeil Island community a proper send off, and letting us come back to see the place one last time.

Here's a few preview pages. I tried to keep this project under 48 pages, because I feel that's as big as a "mini comic" can get before it starts to feel unwieldy, but I still have a lot more memories and stories to tell about this place.

Thanks for letting me share this.
Posted by Colleen at 11:28 AM No comments:

Cartoonist's Night at the Theater 3- Evita at Northern Stage

Wow, Northern Stage invited us back to sketch another performance! Unfortunately (or rather, fortunate for the students, but unfortunate for this event) this was the night after Lynda Barry's first writing class with the Center for Cartoon Studies. It's an (amazing) intensive program, and the students were there all day, so we didn't have a whole lot of a turnout for this performance.

But those that did make it got quite a show! I was really impressed by the performance, especially as this dress rehearsal we saw was the first time the cast had gone through the whole play, beginning to end.

Here's some quick watercolor sketches I did. Click on the thumbnails for a larger version.

Thanks again to Northern Stage for having us.
I'll post links to other people's sketches as they come in!

EDIT:
Sketches from Melanie Gillman! Loved her hilarious take on the show-
http://contriveathon.livejournal.com/38561.html

Rejoice in this acclaimed musical, which ran for over 1,500 performances on Broadway! The rise to power and acclaim of the larger-than-life Eva Peron has thrilled audiences around the world for 30 years!

I'm back from NYC (thanks, MoCCA), and tonight I get to go pick Lynda Barry up from the airport.

SURE HOPE IT GOES BETTER THAN LAST TIME-

THE TRIALS OF SIR CHRISTOPHER
6x9", 204 pages, black and white interiors, full color cover, $12
"The Trials of Sir Christopher" is a collection of two graphic novels, each completed as a part of National Novel Writing Month (NaNoWriMo) in November of 2009 and 2010. Each chapter is 100 pages, and was completed in one month by C. Frakes.
The story is about a bumbling knight, Sir Christopher, and the monsters he battles.
Ages 12 and up (some violence) 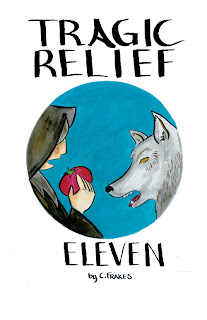 TRAGIC RELIEF #11
32 pages, b+w, color cover, 5.5 x 8.5, $4
Tragic Relief is an irregular mini comic series written and drawn by C. Frakes.
Issues #11 features the third chapter of "Basket Ogress", a story that will be serialized in 6 issues, as well as a short back-up story, "Tomato Dogs", about werewolves and strange gardens.
Ages 7 and up (Goosebumps-level scary)

QUATRO MONSTRO
16 pages, b+w, screenprinted cover, ONLY $1
An anthology created just for MoCCA 2011, so be sure to get your copy there. 4 short stories, 4 monsters, each 4 pages long, available at table M4!
Comics by C. Frakes, Katherine Roy, Laura Terry, and Jon Chad.
All ages (cute monsters, not scary)

Hope to see you there!
Posted by Colleen at 11:43 AM No comments:

Werewolf sketches.
Posted by Colleen at 9:32 AM No comments: