Hey, Rob over at Panel Patter thinks you should pick up a copy of Island Brat at SPX (September 15-16th in Bethesda MD), and who am I to argue? Speaking of which-

I'll be at table J3 at SPX 2012, along with Jon Chad and Laura Terry for the 3rd year in a row. It's right near the entrance, you can't miss us. If you go to the show and say you can't find our table, we know you're lying.

Posted by Colleen at 7:40 AM No comments:

Happy Friday, Everyone! Here's some sketches. 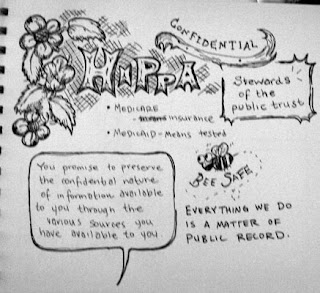 Earlier this week I had to attend a 4-hour training session for The Day Job. It was boring and repetitive (central message- Everything is confidential! You are being watched! Seriously, don't tell anyone!) Took notes in my sketchbook to keep awake. 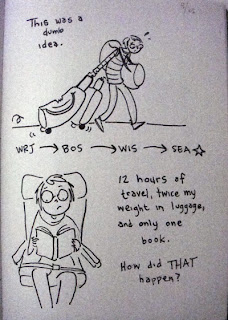 In that same sketchbook, I found an old doodle from almost a year ago, when I flew home from Vermont for a family reunion. I'd bought the plane ticket before I decided to move back to Seattle, hence the two cross-county trips in less than a month. 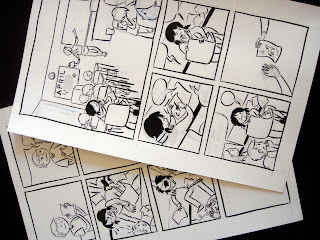 For the record, I've started working on Basket Ogress again, and hope to have a new chapter finished by Short Run. Realized recently that I've been working on this book since 2009...I can't think of anything else I've stuck with so long. 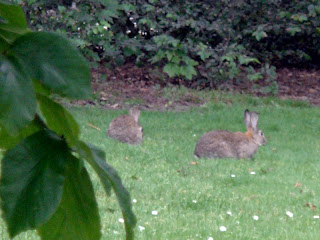 And if you don't like any of that, here's some bunnies I saw in the park. 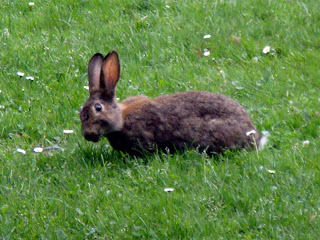 Spent my day off yesterday binge-watching Dr. Who and drawing, but nothing is scanned so you're just getting links this Friday. First, Rob Clough has been on a CCS kick lately, and was nice enough to review a bunch of my comics, as well as the latest Funny Aminals Anthology.

Getting things ready to head to SPX in like six weeks, and I was just accepted to the Short Run Festival here in Seattle. I'll be sharing a table at that with my friends from Alice Blue Review. My battery is about to go dead, so I guess I'd better hit "publish". Next week- pictures!
Posted by Colleen at 12:17 PM No comments: