Posted by Colleen at 5:46 AM No comments: Links to this post

I got a commission to paint MODOK (Mental Organism Designed Only for Killing) fighting a luchador, and was pretty darn excited about it. Here's how the thing went down: The sketch with yellow. Add some black and some "Kirby Crackles" and it's done! Click the pic to enlarge. And here's the movie poster that inspired it, for reference.

A bunch of other awesome cartoonists have gotten on this boat as well. Check it out:

Colleen Coover
Posted by Colleen at 11:27 AM No comments: Links to this post

I'll be bringing two new issues of Tragic Relief to SPX, and they're both available right now in the store. Matt Brady over at the Warren Peace blog was nice enough to review issues #8 and 9. Thanks, man! I haven't been the best about keeping up with reviews, so I added a Press Page to the blog with links to all of the ones I could remember, since blogger lets you add additional pages now. It's like website building for technologically impaired people, like myself. I got these printed through Moxicopy, and recommend them quite highly. The prices were the lowest I've found, the printing is good quality, and they were both delivered to my door with free shipping about a week after I placed the order.

There's also a couple of anthologies I've contributed to that'll be debuting at the show. More next week!
Posted by Colleen at 11:03 AM No comments: Links to this post 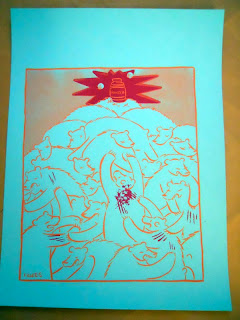 My birthday is coming up on September 2nd! I'm turning OLD.

To celebrate, I've put a bunch of cheap prints n' paintings up on my Etsy store, and I'll throw in a copy of the "Tragic Relief" book with each order.

Check it out!
Posted by Colleen at 11:00 AM 2 comments: Links to this post SPX is less than a month away! We've got our transportation and accommodations all set, the 2010 Ignatz nominees were just announced, I'm pretty excited about it all, and will be bringing a couple of new minis to share. Been drawing a lot this summer- rainy summers are good for that.

Jon Chad and I will have a new split mini at the convention called "Guilty Pleasures". It's about how I can't stop reading this trashy manga series and he can't stop talking about Gordon Ramsay, among other things.

I'll write about the other new books later in the week. One is at the printers right now, and is scheduled to arrive on my doorstep Monday!
Posted by Colleen at 8:57 AM No comments: Links to this post

Changing up the blog! Trying to make the banner and buttons better reflect my usual drawing style.

And now for the news:

Rich Kreiner at The Comic Journal reviewed another one of my minis here. Thanks, man! I actually don't have any copies of this comic left, and don't plan to print more because color copies are expensive, but I think you can buy it at I Know Joe Kimpel.

For Chicago friends, you can now buy my book Woman King at Quimby's! Have I mentioned there aren't many copies of this left? I expect to be sold out after SPX, so get it while you can.

Speaking of the Small Press Expo, I am SO EXCITED about this year's convention. I'll be tabling with Jon Chad (who just updated his website. Check it!), Katherine Roy and Laura Terry, and we have definite plans to rock the party that rocks your body.
End of transmission.

Posted by Colleen at 8:14 PM No comments: Links to this post

I don't tend to get ideas for short comics, so much as impulses. And when these impulses pop into my head, they have the voice of the guy from this Kids in the Hall sketch shouting "Let's boil the broom!"

In the case of Tragic Relief #8, the voice said "Let's draw a shark! Let's draw a guy PUNCHING a shark!" And then I had draw a story around that image, which ended up being: Tragic Relief #8- Revenge! I've had this mini for sale at a couple of conventions now, but only just got around to adding it to the shop. Apologies for that. Rich Kreiner of The Comics Journal wrote a nice review of it here. Check it out!


Tragic Relief #9 is available now, too! I'm changing the format again with this issue, gotta the readers on their toes (all ten of them). For the next 6 issues of the Tragic Relief minis, I'll be serializing my next graphic novel "Basket Ogress". Each issue will also contain a short back-up story, for people aren't into the whole Pacific Northwest mythology kids story thing. The back-up story for this issue is called "The Hunt", and started because I was looking at too much Frank Frazetta art after he passed away, and starting thinking "Hey! Let's draw a jungle girl story!"

I like feedback, and tend to do a lot of corrections and redrawing pages when making comics- I've redrawn and condensed about seven pages of this chapter of "Basket Ogress" since Rob Clough last reviewed it. So send me a your thoughts- ColleenFrakes@gmail.com Issue #10 is already nearly done, and should available at SPX in September, and online a few days (or months) after that. I'm bad about these sort of things.
Posted by Colleen at 10:17 AM No comments: Links to this post