Blowing Up The Internet With a Sketch Bomb

Hey! I've had a lot of free time over the holidays, so here's a bunch of random watercolor sketches- BOOM!
Posted by Colleen at 9:12 PM No comments: Links to this post 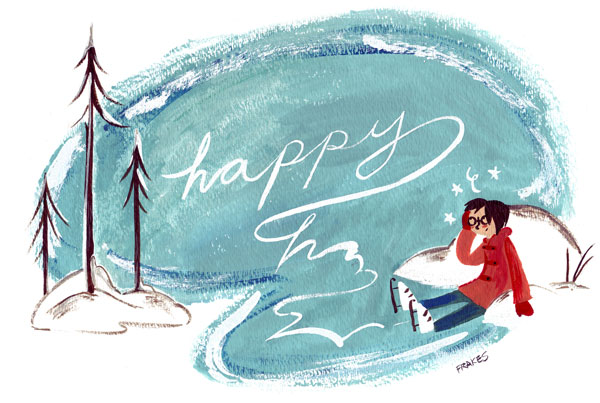 Posted by Colleen at 8:02 AM No comments: Links to this post 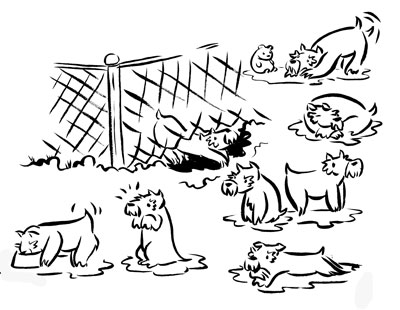 I will never get tired of drawing schnauzers. And Washaway is still updating every Monday and Friday.

Posted by Colleen at 8:45 PM No comments: Links to this post

First- Links! New comic up at the website. It'll be updating again every Monday and Friday until I run out of

Second the disclaimer- I am not 100% sure I'm allowed to blog about this. Or, even talk about it. I did email some other people involved in the project, waited two weeks (which is like, a year in internet time) and when there were no responses, decided to just go for it. Send me a "cease and desist" if it's really a problem.

And now an explanation of the title- Someone (I think it may have been James Sturm?) told me early on in my career that 80% of the projects you try for aren't going to go anywhere. And most of the time, it's not anyone's fault. Projects have a way of dissolving. So you have to try a lot.

This is a story about some cartoonists and one of those projects, Illegal Aliens!

Back in like, 2006-2007, when the first class of CCS was deep into the thesis panic, the opportunity came up to create a dvd insert comic for a movie. This was the second comic of that kind that CCSers had worked on, the first was for the Last Broadcast dvd release, but because of where my trip home had fallen that year, I was only nominally involved in the project- think I may have helped scan a few pages, but that was it. This time I was excited to be involved from the beginning, and was even part of a small group of students who drove over to Edgewood (the movie's studio) in Rutland VT to see a rough cut of the film. And...yeah, it was bad movie. But fun bad, so bad it's almost good. I mean, it starred Anna Nicole Smith and Chyna, so our expectations weren't that high.

So, notes in hand, we all put aside our theses (thesises?) for a few months and got to work on the comic! A first draft was completed pretty quickly, sent off to Edgewood, and...then we waited. And waited. And waited and waited. My specific job on this project was acting as the liason between Edgewood and the CCS team, so I was calling and emailing them weekly with no response. When I finally did hear back, it was to let us know that all work was on hold due to the death of the film's Associate Producer...it took a few minutes for things to click. Anna Nicole Smith and her son were the Associate Producers. Living in a small town in rural Vermont, holed up in the studio trying to finish a thesis and (what was for most of us) the first paying comics job of our careers, we'd missed the news.

And everything fell apart from there- both for us and the movie. 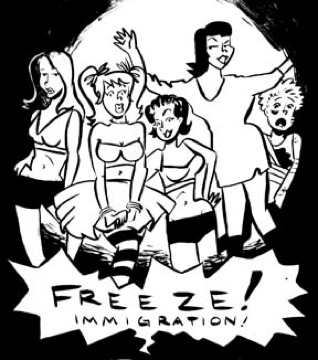 ﻿
This was the only image I felt comfortable posting, it's a rejected cover design I did for the Illegal Aliens comic. All the originals are gone, and I'm pretty sure that any comics pages are property of Edgewood.

And now there's a documentary about it! That's really the whole reason behind this post. I didn't make it to the Seattle showing, but I have to wonder if there was any mention of the comics project or CCS involvement...anyone heard anything?
Posted by Colleen at 12:14 PM No comments: Links to this post 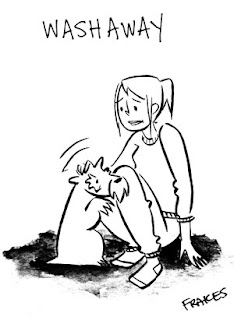 Assuming I pushed all the right buttons, there will be new comics on the website starting...NOW! www.tragicrelief.com
Posted by Colleen at 12:30 AM No comments: Links to this post